Elementals is a fight game 1 vs 1, the goal is to destroy the enemy Golem, but before you can do it you will have to gain ground on your enemies by destroying their totems and building your own.
If after 10 minutes, people have not managed to kill the enemy Golem, the 2 get up and compete in the center of the map with the players. The last one alive has won. 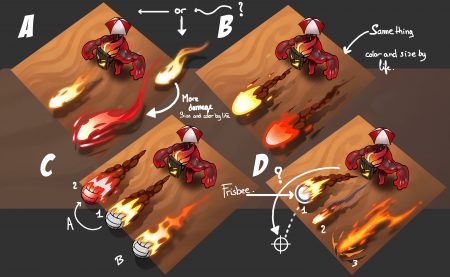 Schedules and sprints on ClickUp:

During this project, some important problems arose. The first one that quickly manifested was the absenteeism of our programmer, I first saw with other people in the group if they could program some features to reduce the workload of the absent person. After a few days, we were wasting too much time trying to do something correctly. So I went to see a programmer from another group and we did an exchange, as our game artist team was very productive, instead from the programming of features, we exchanged graph assets to help the other group.

We also had a problem with motivation due to the length of some sprints. I managed to quickly detect the reason which was that people did not feel the progress of the project. So I reduced the sprints into several small with more regular milestones in order to have a regular rendering and content to show.